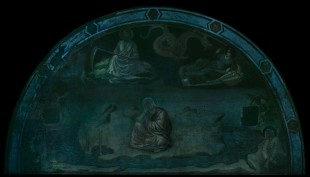 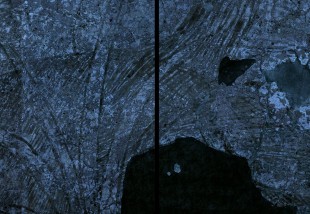 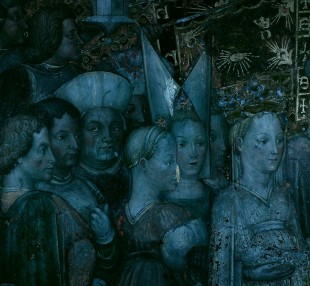 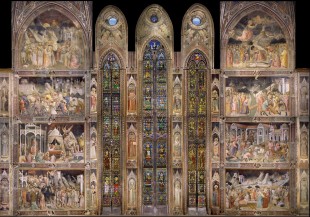 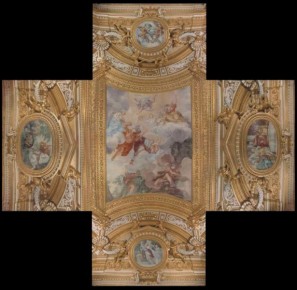 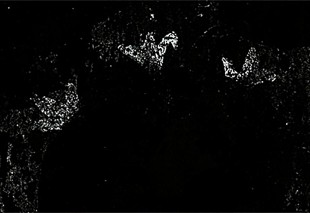 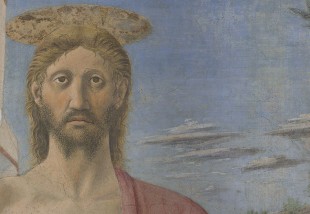 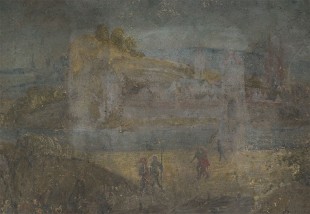 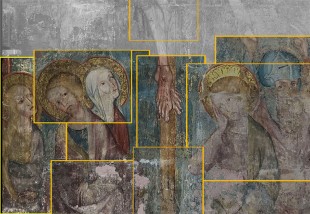 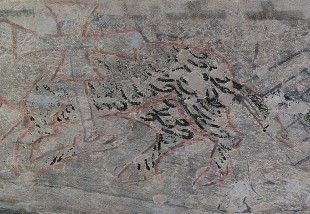 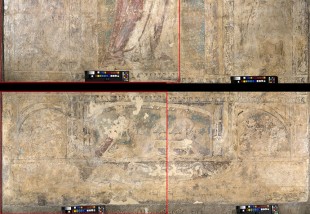 
Cecilia Frosinini:
The Opficio delle Pietre Dure has already been collaborating with Annette Keller since 2000. A long and highly productive period that has brought forth intersections between various competencies and consequently significant results in the area of imaging technologies in art diagnosis.
I would like to give a few examples of this interaction to highlight the complexity of the diagnosing process and the notable part it plays in research, namely discovering the techniques employed in the creation of a work of art and unearthing its history.
The first example is the discovery of how to use the properties of UV reflection. By combining UV reflection with a congruent exposure made in visible light and subsequently manipulating the image into a virtual rendering – the so-called UV false colour image – we can easily differentiate between pigments, especially modern ones. For this project to succeed, it was essential that the physicist Alfredo Aldrovandi, the restorer Enzio Buzzegoli, both employed at the Opificio delle Pietre Dure, and Annette Keller collaborated closely.
Another example: the UV fluorescence photo campaign of the mural paintings by Giotto in the Cappella Peruzzi in the Santa Croce Church in Florence.
In 2009, the Opificio delle Pietre Dure proposed to the Getty Foundation to undertake a scientific art diagnosis project that would examine the technique that Giotto employed to create the mural paintings in the Santa Croce Church in Florence. The artist’s two Florentine masterpieces in the Cappella Bardi and the Cappella Peruzzi were to be analysed.
Right at the start of the project and the evaluation of the first non-invasive diagnosis results, we realised that the UV fluorescence photography technique made the nearly invisible mural paintings clearly visible again, in fact, it made them appear almost three-dimensional. This discovery immediately aroused the interest of scientists studying Mediaeval art. By making the mural in the Cappella Peruzzi visible again with ultraviolet fluorescence exposures, new insights for the interpretation of Giotto’s piece could be gleaned. This is one of the greatest discoveries of the past decades in terms of research into Giotto’s works. It enabled a more accurate dating and a better understanding of the artist’s hitherto obscure later period.

Alfredo Aldrovandi:
Knowing that we can produce a scientifically relevant result in terms of art history has led the Opificio delle Pietre to initiate a global project named “Giotto Segreto”. Aim of the project was to make paintings that have disappeared over time visible again – for scientists and experts but also to make this extraordinary discovery visible to the wider public.
By collaborating with Annette Keller and thanks to the funding by the Harvard Center for Renaissance Studies Villa I Tatti (Florence), the Opificio delle Pietre Dure was able to realise a photo campaign that documents the entire Cappella Peruzzi in UV fluorescence lighting. The exposures were made in the highest possible resolution using the stitching method and were subsequently assembled. An extremely complex method due to the great number of single exposures and the difficulty of creating truly homogenous lighting.
Within the next two years – once the scientific volume has been published – the results will be made available to the public via the Harvard University website. Here, the project will be presented from every angle: historically, art historically, photographically.

Annette T. Keller – in 2013, on behalf of the Milan council and the management at the Musei del Castello Sforzesco, artimaging has completed a project using optoelectronic multi-spectral exposures in maximum resolution. A total of 61 drawings by Umberto Boccioni (1882-1916) at the Civico Gabinetto dei Disegni del Castello Sforzesco were examined.
The exposure techniques employed were: exposures in diffused light, infrared exposures (950 nm), infrared false colours and ultraviolet fluorescence exposures.
The exposures are currently being evaluated at the Gabinetto dei Disegni del Castello Sforzesco in collaboration with the Opificio delle Pietre Dure, Settore Materiali Cartacci e Membranacci, Florence.
The imaging project was sponsored by the Solomon R. Guggenheim Museum and Foundation, New York.


We hereby certify that, in September 2013, Ms Annette Keller completed a photo project to document and produce a multi-spectral art diagnosis of the paintings at the museum Casa Martelli.

In order to study the conditions of the works of art, possible earlier changes / restorations and the techniques employed by the painters, the approx. 150 works were captured and analysed with the diffused light, infrared, UV fluorescence and infrared false colour methods. This is essential groundwork, enabling further studies of each individual work.

The imaging process was performed with great competence and professionalism and was completed both in the way previously arranged and within the scheduled timeframe. The data – carefully ordered and complete with colour calibration standards for further scientific evaluation – was handed over, as agreed, in February 2014.

Having surveyed her competencies, I can confirm that Ms Annette Keller is one of the most professional and skilled people available for this kind of documentation.